COVID-19 Notice: We Remain Here For You. Learn More.
Call to Talk to a Highly Experienced Criminal Defense Lawyer
Contact Us Now For a Free Consultation 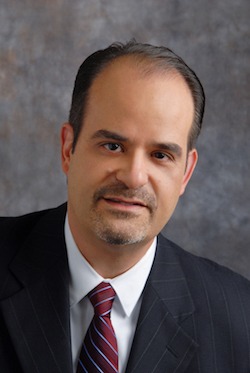 James G. Dimeas is a Chicago and Schaumburgbased criminal defense lawyer who has spent the past 26 years concentrating his efforts in the practice of criminal law. James Dimeas concentrates his practice on handling criminal cases in Chicago, Cook County, DuPage County, Kane County, and Lake County, Illinois.

James Dimeas is a lifelong resident of the Chicagoarea. James Dimeas is a 1985 graduate of Gordon Tech High School and a 1989 graduate of Loyola University of Chicago, having earned a Bachelor of Science degree. James Dimeas attended the Western Michigan University, Thomas Cooley Law School graduating in 1992 with a law degree. While attending Law School, James Dimeas helped teach Law classes at Lansing Community College in Lansing, Michigan. Upon graduating from law school, James Dimeas took, and passed, the Illinois Bar Exam the same year and was sworn in as an Illinois lawyer in 1992. James Dimeas became a member of the General Bar for the Federal District Court the same year. In addition to the General Bar for the Federal Court in Chicago, James Dimeas is also a member of the Trial Bar for The United States District Court for the Northern District of Illinois. Admission to the Trial Bar for the Northern District Federal Court is reserved for those lawyers that have sufficient trial experience to be allowed to do a trial in Federal Court in Chicago. Application for admission to the Trial Bar is required and will only be approved after it is thoroughly reviewed by a panel of Federal Judges in Chicago. James Dimeas has appeared in Federal Court as far away as Las Vegas Nevada for a Mortgage Fraud Federal criminal case and has appeared in Chicago and Rockford Federal drug cases and in cases involving the Illinois Secretary of State driver’s license scandal, which ultimately ended with the conviction, and the imprisonment of the sitting Governor of Illinois.

James Dimeas is highly experienced in the area of Criminal Law. James Dimeas has handled several highprofile cases that have received media attention. James Dimeas has appeared on local television programs and in local newspapers. James Dimeas has been interviewed for his legal opinion by local and national journalists for written and video published material. 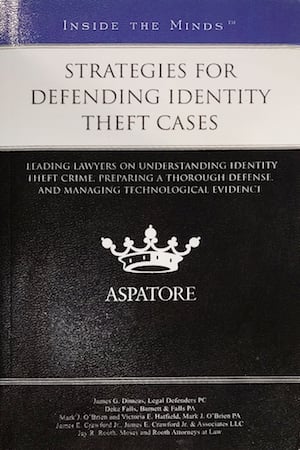 James Dimeas is a published author. In 2012, Thomson Reuters, one of the nation's largest publishers of books for lawyers, invited James Dimeas to help write a book for lawyers to instruct them on how to properly and effectively represent criminal defendants who are being prosecuted for the criminal offense of Identity Theft. Mr. Dimeas's submission was chosen to be Chapter 1 of the book.

James Dimeas has been happily married for 19 years and currently lives in the Northwest suburbs of Cook County, within reach of all the courthouses in Chicago, Cook County, DuPage County, Kane County and Lake County.

You can always contact James Dimeas for a free and confidential consultation. You can talk to James Dimeas personally by calling 8478077405.

Contact Us
Practice Areas
Client Reviews
★★★★★
I got into an argument with my ex-boyfriend. One thing led to another and when he came close to me I pushed him away. He called the police and when I spoke to the police I told them that I pushed him without realizing that you don't have to hit someone to be charged with a Domestic Battery. Being arrested was terrifying. I spoke to several attorneys who promised they would win the case and were charging a ridiculous amount of money. A friend referred me to James Dimeas. He was straightforward and honest with me and charged me a very reasonable and affordable fee. He got me into the Kane County Deferred Prosecution Program. I successfully completed the program and I just received paperwork in the mail that the case has been expunged and completely removed from my record. I highly recommend Jim Dimeas. He is an honest and straightforward lawyer that will look out for your best interests. E.A.
★★★★★
Had a DUI and hired a lawyer who lived in my building that I knew for years and trusted. Thought he was my friend. Paid him (more than I should have) and he handled my case for almost a year and totally screwed it up. I fired him and found out that he had given up his law license around the time I hired him. A friend recommended James to me and he took over my case and handled it the way it should have been handled from the beginning. I cannot stress how HIGHLY I recommend James Dimeas. I wish I would have hired him from day one. He answered all my calls and text messages and cleaned up a royal mess that had been created by the previous guy that I thought was a lawyer. I consider James to be a friend and recommend him to all of my friends. What a great lawyer and an even better guy! J.P.
★★★★★
I had been accused of doing something, by my then wife, that I did not do. I was 100% innocent and was at the lowest point in my life. My mother told me to call James Dimeas. Her friend recommended him to her. James fought for me in court and refused to back down, even when the prosecution offered to lower the charges and make me plead guilty. I refused to plead guilty to something I did not do. The case went to trial and James won my case. I was found not guilty because I was NOT GUILTY. I HIGHLY RECOMMEND JAMES DIMEAS! Not only is he a great lawyer, but he is also a great human being. The truth shall set you free! C.D.
★★★★★
James Dimeas is a great lawyer who knows what he is doing and will guide you through every step of the process. He will go above and beyond what he needs to do to help you out. Sometimes I would text him in the evening or the weekend with a question and he would always respond. Really made me feel like he cared about me. When we went to court he tore apart the girl that was making false allegations against me and he won my case. That was one of the greatest day of my life. If you need legal help, the only lawyer should call is James Dimeas. Highly recommended! E.L.
★★★★★
I am so lucky to have stumbled upon this great attorney. I made a really stupid mistake at the worst time. I needed to get a case dismissed within 2 or 3 weeks so I could join the military. I could not leave for Basic Training until the case was dismissed and Jim made some calls and got the case dismissed. What a great guy. I’m so lucky I found him online and called him! Somebody was looking out for me. J.S.
View More
Submit a Law Firm Client Review